Throughout 2018 and 2019, buildingSMART ran a suite of parallel projects to extend the scope of IFC for a variety of infrastructure domains. Following a series of workshops, the Railway Room and the Infrastructure Room established a strong collaboration to undertake harmonization between these projects and as a result, the "IFC Infrastructure Extensions" project was formed.

The IFC Infrastructure Extensions project is a harmonised approached to linear infrastructure assets incorporating Road, Rail, Bridge and Ports and Waterways. These individual projects are operating across different time frames with different milestones. They do however address common concepts with significant overlap. These domain projects address several concepts that are common. Further to these domain focused areas, a further project was established called "Common Schema" to track those separate domain projects and to identify and define common concepts (such as spatial structure, geotechnics and earthworks, utility networks, etc.).  and to ensure a level of harmonisation and consistency in the development of the separate domain extensions. Two of those projects (Road and Ports & Waterways), having completed a “requirements definition” stage, were developing conceptual models and draft schema of their proposed extensions during much of 2019. The Rail project prepared three major reports (Requirement Analysis, Conceptual Model and Data Requirements) as part of the Candidate Standard package delivered ahead of the Beijing Summit (28-31 October 2019). The Common Schema project delivered extension proposals for key areas including geotechnics, earthworks, spatial structure and kinematic envelopes. By the middle of 2019, it was recognised that there was an urgent need to harmonise the work across those domains, taking into consideration the work previously completed ahead of the IFC Bridge Candidate Standard.

There was unanimous agreement across all the infrastructure project domains that our collaborative goal would be to deliver a single harmonised IFC schema extension proposal that incorporated all the proposed extensions (road, rail, ports & waterways and common schema).

The collective harmonized Candidate Standards aim to deliver major standards and solutions for various infrastructure domains. Each domain has a dedicated web page that outlines the project and provides an opportunity for new members to get involved. You can read the full list of UML reports below.

IFC Bridge became an official project in buildingSMART in October 2016 following the MoU supported by the Infrastructure Room. The project was initiated following the IFC alignment work and harmonization opportunity presented by the IFC 4 release. The project team also recognized the importance of gaining support from software vendors, addressing missing property sets and the scope for overall extensions. The French organizations MINnD were the driving force behind the technical requirements and deliverables in this phase.

Provide a description for the extension scope for IFC 4 related to bridges.

Develop a set of specifications for the extension of the IFC 4 conceptual model.

Create a dedicated space in the bSDD for bridge property sets including US specification.

Develop a set of specifications for bridge MVDs for machine readable bridge models.

in 2015, an initiative was started with the aim of defining information requirements for the full lifecycle of highway bridges in the U.S. The primary objective of this project was to review existing schemas and data models that could be leveraged for this work. This included IFC, LandXML, TransXML and others. After the initial consultation, it was agreed that the focus should be on construction plans for the purposes of bidding and building bridges, with the greatest value targeted at inspections and maintenance of assets.

Two test cases were developed based on common bridge projects in the U.S. First was a steel girder bridge, and the second was a post-tensioned concrete box girder bridge. Both test cases represented typical bridges with complexities such as curved parabolic alignments, variable cross-framing, cross-elevations and other considerations.

This project was brought forward as part of the TPF-5(372) "BIM for Bridges and Structures" pooled fund project. More details of this can be found here: https://bimforbridgesus.com/.

Following the initial test cases, it became clear that compatibility and seamless integration with software was required in order to meet the complexities of the projects. There was also an analysis of the impact of the alignment work for the future of information exchanges. The teams, therefore, delivered technical specifics and three reports on information exchanges, schema analysis and component modeling.

Developing a Strategy for European and U.S. Requirements

Given the complexities of the project, it was agreed that a two-step approach would be required both focused on short and long-term goals. MINnD in France had shown how feasible it could be to achieve goals and objectives with software testing. The U.S. FHWA BrIM documentation stated that modifications to the schema must be carefully managed to ensure compatibility with existing software already in use. The project was then split into two steps.

This step focused on developing a solution for the exchange of ordinary bridge data using the neutral IFC 4 standard with minor extensions. This step was done in conjunction with MINnD, FHWA BrIM, KICT, China Railway BIM Alliance and in collaboration with the Infrastructure Room. The overall objective was to consolidate the national proposals for an IfcBride standard. A new IFC schema version would support the exchange of bridge data in sync with the Overall Architecture project. The team would also develop single documentation of this consolidated specification and work with early software adoptors for testing and validation. 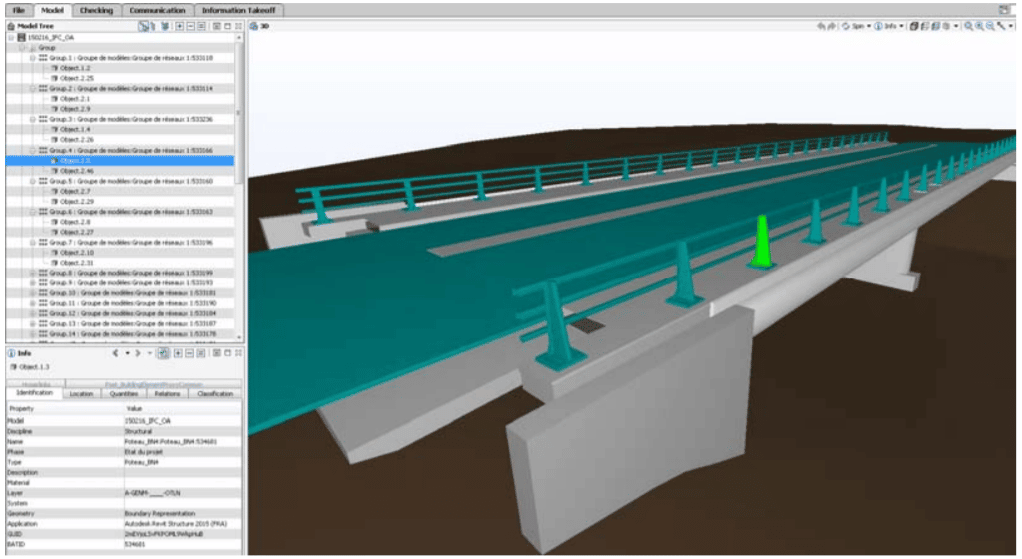 The scope of Step 1 was:

This step focused on the project plan and set of deliverables needed to support the national requirements and scope. There were also a number of work packages and a roadmap designed to align with other work being done such as Overall Architecture and IFC Infrastructure Extensions. This phase also included a number of Expert Panels and fell under the governance of buildingSMART International and the Solutions and Standards Program. There was agreement amongst the project teams that a Candidate Standard would be delivered through the governance of buildingSMART International and detailed IFC Bridge specifications for information exchange for the U.S. market. The deliverables and outputs can be found below.

Capture the requirements for IFC Bridge project and align to the IFC 4 standard. This project plan was split into two parts and enabled cross-collaboration between different national requirements.

To analyze the requirements from the different stakeholders and look at the feasibility of the proposed project. This report focused on common use cases.

The Conceptual Model focused on the necessary data structures for modelling pre-stressing systems. This report covers the scope, use cases and bridge types that are covered by future extensions of IFC Bridge.

The IFC Bridge Candidate Standard was delivered by the project team. This significant milestone brought together teams across the various projects to deliver this standard. You can read the standard below. 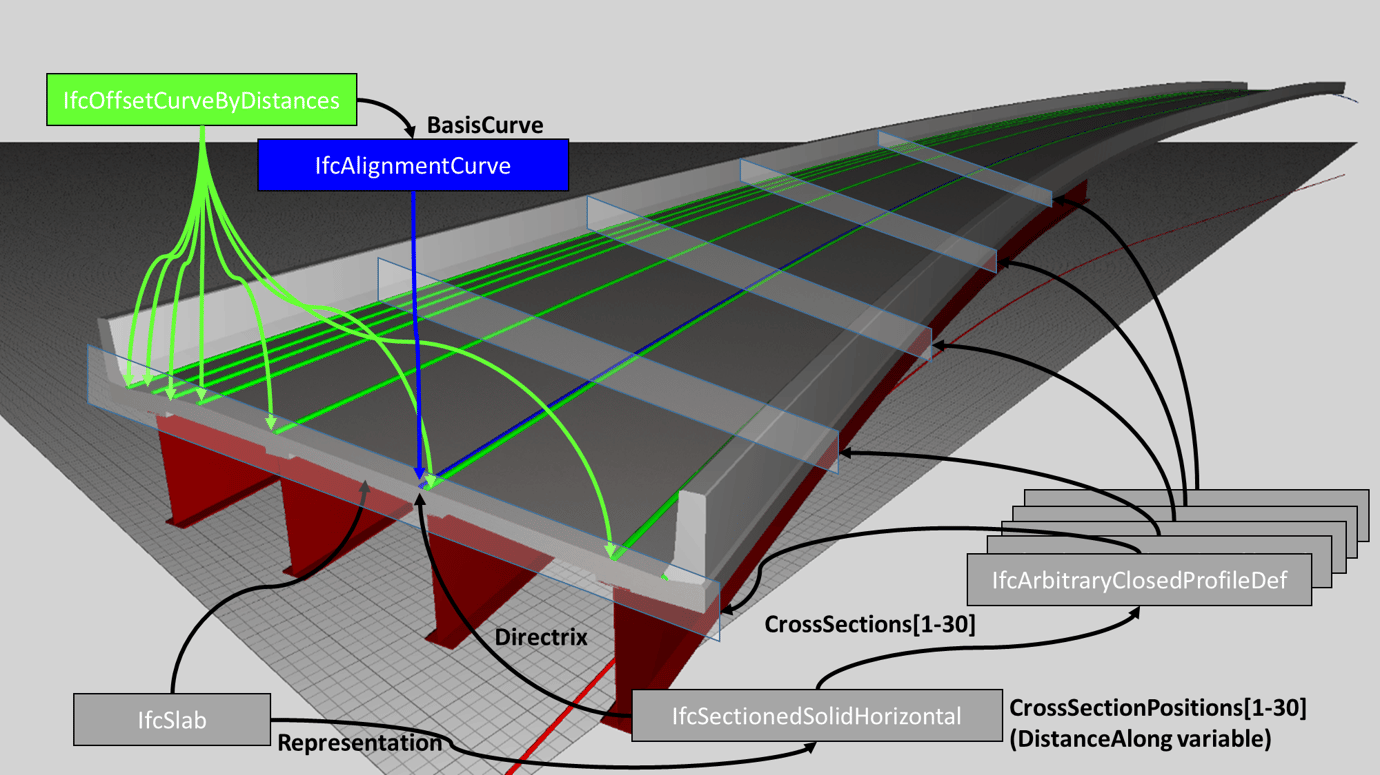 The conceptual model included IFC extension requirements that were collected by the project teams. 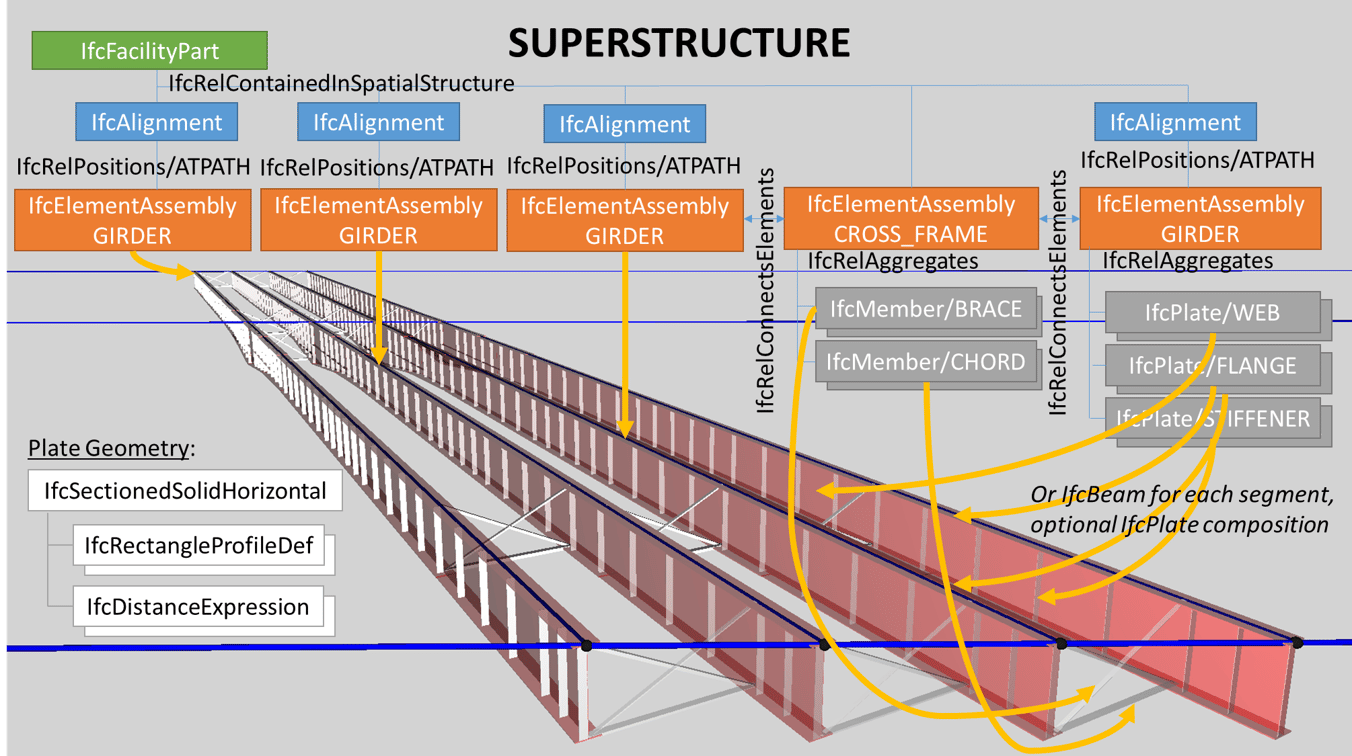 Various bridge types were mapped and modeled by the software already in use.

The US use cases are published on the National Institute of Building Sciences (NIBS) website. More information about these and more can be  found here: https://www.nibs.org/page/bimcbelow.

A series of Expert Panels were conducted by the project team between 2017 and 2019. These regular online events brought together the technical community to review and comment on the development of the candidate standard. You can watch them below.

Following the delivery of the IFC Infrastructure Extensions Project, buildingSMART is seeking further engagement from the community. The project team is calling on Bridge domain experts and software vendors to start work on the standard. You can get engaged with this significant project and be part of the growing network.

Objectives for the next phase of the project

The IFC Bridge team continues to work on delivering a final standard. There is also a joint commitment to the deployment project to deliver a harmonized standard with work continuing on the common schema project.

IFC Bridge is part of the Common Schema project and is set to benefit from the modernization work being done by bSI.

buildingSMART International and the stakeholders of the IFC Bridge Project are inviting public authorities, software vendors and software developers to join the next phase of the project. In the coming years, the teams will aim to deliver a final standard for the industry but requires greater engagement.

Why should you get involved in the IFC Bridge project?